For the Classics for Comfort Blogathon, I could have easily named 50 classics that offer cinematic comfort over the allotted five films. The movies I listed are ones that I love for their uplift, whether it is romantic, musical, or suspense. These films have never failed to entertain me and also lift my spirits.

Now, Voyager, 1942
Now, Voyager shows that Bette Davis could be just as brilliant playing a sympathetic character as she could with her famed villainous roles. Bette’s Charlotte Vale goes from a neurotic spinster to a stylish but insecure socialite to finally, a self-assured, independent woman. Davis takes Vale through an emotional minefield: a monster mother, a kind but married lover, and a rich but dull fiancée. Davis’ character evolves every step of the way. Even after her “cure,” Charlotte is still uncertain, a voyager in uncharted waters. Had this been a MGM production, with Joan Crawford or Norma Shearer, Charlotte Vale would have been fine and dandy after her therapy and makeover! Though 1942’s Now, Voyager’s plot is pure soap, the story still resonates with emotional truth and empathy. Bette Davis once wrote that she never received as much fan mail as she did for Now, Voyager, with people writing about their own tyrannical family members. This WB personal voyage is sublime.
For full review: https://ricksrealreel.blogspot.com/2018/02/now-voyager-1942.html

North by Northwest, 1959
As I watched1959’s North by Northwest again recently, I realized the secret weapon is Eva Marie Saint, as mystery woman Eve Kendall. What Saint brought to North by Northwest, encouraged by Hitchcock, was an understated, confident, smart sex appeal. Brains and beauty were a hallmark of the Hitchcock blonde. After playing several sweet young things, Eva got to play the bad girl/good girl role as Eve Kendall. Eva’s Eve initiates an introduction to Cary Grant’s man on the lam, while aboard the 20th Century Limited. Sparks and risqué repartee fly with Eve and Grant’s Roger Thornhill, but many twists and turns follow their further meet ups. Saint’s subtle changes in Eve’s supposed character benefited from her Actors Studio training, and was visually enhanced by Saint’s smooth makeover, guided by Hitchcock. North by Northwest presented her as a subtle siren who lures Cary Grant’s leading man. This Hitchcock classic takes viewers on the run, across the USA, with great humor, suspense, and romance. Grant and Saint lead a stellar cast. And Eve Kendall is a forerunner to the modern movie heroine and benefits greatly from having a multi-faceted performer like Eva Marie Saint to essay her.
For full review:
https://ricksrealreel.blogspot.com/2019/07/eva-marie-saint-secret-weapon-of-north.html

Somewhere in Time, 1980
Somewhere in Time captures Christopher Reeve and Jane Seymour at the height of their youth and beauty for eternity in this 1980 fantasy romance. Somewhere in Time begins with college grad Richard Collier (Reeve) celebrating the performance of his first play. At the after party, an aged woman approaches him, and clasps a watch into his hand, saying, “Come back to me.” Eight years later, Collier is a playwright living and working in Chicago. Suffering through a breakup and writer’s block, Richard goes to Michigan’s Mackinac Island to get away. Feeling a connection there, he sees a photo of a long ago actress that fascinates him. There seems to be clues of a strong connection between them. With the help of a professor who’s believes in time-travel, Richard seeks to self-hypnotize, to go back in time, and meet his dream girl. Once he goes back to the island circa 1912, Richard indeed meets the actress, Elise McKenna, but finds more than he bargained for. Jane Seymour later said that no one seemed to believe in Somewhere in Time except the people actually making the movie, and they were validated when Time went from instant cult classic to a perennial favorite.
For full review:
https://ricksrealreel.blogspot.com/2019/06/somewhere-in-time-and-its-timeless.html

The Pajama Game, 1957
The Pajama Game, the delightful 1957 Doris Day musical, was released two years prior to Pillow Talk. That glossy sex comedy, with Rock Hudson, set Doris’ image stylishly in stone for the next decade. But in Pajama, Doris Day is a down-to-earth delight in this underrated Broadway adaptation. The story is as lightweight as those jammies they make Sleep-Tite Pajama Factory, where the workers’ call for a seven-and-a-half cent raise is turned down by the boss. He then hires a tough guy to become the factory superintendent to keep everyone on task. John Raitt plays Sid, the new man on the job; Doris plays Babe, the head of the grievance committee. Guess what happens next?
Doris Day was 35 and filled with snappy energy, smarts, not to mention natural sex appeal, in The Pajama Game. The rest of the cast is a delight down to the smallest parts. Vaudevillian Eddie Foy, Jr. and character actress Reta Shaw have a great song and dance number, “I’ll Never Be Jealous Again.” For Carol Haney, this would be her only film role with dialogue, but she’s a scene stealer as the bookkeeper who keeps the numbers close to her heart! Her big number, “Steam Heat,” is a stellar Bob Fosse choreographed number, and Haney’s moves are marvelous. Though The Pajama Game debuted 63 years ago in 1957, and it looks like a snapshot of an era, the film still feels fresh. Aside from the great material, credit must go to Stanley Donen, whose body of work is filled with some of the most stylish, imaginative musicals and comedies of the post-war era.
For full review: https://ricksrealreel.blogspot.com/2017/10/the-pajama-game-1957.html

The Enchanted Cottage, 1945
One way to look at1945’s The Enchanted Cottage is a pure Hollywood golden era fantasy.  Another is that the film’s message—beauty is literally in the eye of the beholder—is timeless. First a play, then a silent movie, The Enchanted Cottage was remade two decades later for WWII audiences, with Dorothy McGuire and Robert Young heartwarming as the leads.
Oliver Bradford brings his lovely fiancée to a cottage where honeymooners once nested, on the New England coast. The tradition was broken 25 years earlier when the last groom died tragically; the bride is now the cottage’s taciturn owner/housekeeper. The current couple's plans are put on hold when Oliver is sent off to war after the Pearl Harbor attack. Tragedy strikes when he is injured and left disfigured. His bride-to-be bails and Oliver arrives alone at the cottage. The soldier meets the maid, Laura Pennington, a girl with a homely face and the heart of a romantic. They slowly bond and Oliver proposes. Sadly, Laura is more in love than Oliver. Yet, on their honeymoon, he sees past his self-pity and realizes how loving Laura is. Miraculously, they begin to appear physically beautiful to each other. Laura attributes this to the enchanted cottage. Hedging their bets, they keep to themselves. Finally, the newlyweds decide to face his parents. Their sympathetic pianist pal, who is blind, tries to warn the visiting family. Let’s just say what follows isn’t pretty! Never fear though, the couple gets their happy ending. And the movie’s message will warm your heart and maybe bring a tear to your eye.
For full review:
https://ricksrealreel.blogspot.com/2018/05/the-enchanted-cottage-1945.html 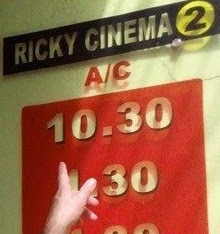 Posted by http://ricksrealreel.blogspot.com/ at 10:55 AM

Email ThisBlogThis!Share to TwitterShare to FacebookShare to Pinterest
Labels: North by Northwest, Now Voyager, Somewhere in Time, The Enchanted Cottage, The Pajama Game

http://ricksrealreel.blogspot.com/
Write this blog to keep me writing!

“ONLY ‘the face in the crowd’ changes, but the song remains the same. It is us who have changed. Too many people are willing to overlook the deep flaws of their idols, as long as they can continue to believe the false message.” That’s Rick Gould, author of a terrific blog site about movies, “Rick’s Real/Reel Life.” The above quote comes at the conclusion of Rick’s fine examination of “A Face in the Crowd,” Elia Kazan’s 1957 classic about political ambition run amuck. Now wouldn’t be a bad time to revisit “A Face in the Crowd.” If you want to have a little déjà vu/possible future projection experience. Certainly visit Mr. Gould’s site, beautifully put together, where one can find intelligent and amusing analysis of films as varied as “Giant,” “Dog Day Afternoon” and “Auntie Mame.”

Rick Gould is a writer living in the UP, MI