I re-watched 1962’s Advise and Consent and ‘64’s The Best Man for two reasons. One was to compare these ‘modern’ political dramas with our current day politics. The films focus on topics that are still timely: Advise and Consent details a contentious confirmation hearing and The Best Man covers two competing presidential candidates whose pasts come back to haunt them.

The other was to untangle the two movies in my mind. Both starred Henry Fonda as a politician whose integrity is the focus. In Advise and Consent, Fonda’s Robert Leffingwell seeks confirmation as Secretary of State. In The Best Man, Fonda’s William Russell already holds that title, and is running for President. (A book could be written on how many times Fonda played the President of United States, or other noble politicians and military men.) The two films feature all-star casts, scathing looks at political wheeling and dealing, and surprisingly for the era, both have a gay blackmail subplot.

In both Advise and Consent and The Best Man, Henry Fonda’s politicians have flaws, but are essentially decent men. In Advise, he lies about his early dabbling in Communism, only to spare an equally guilty political friend. In The Best Man, Henry’s character has a history of adultery, which he doesn’t deny. Fonda has a more substantial role as Russell in The Best Man, and is a supporting character as Leffingwell in Advise and Consent. While he’s good in both, Fonda has more to work in The Best Man. In the latter, Henry looks like quite the lean machine as he takes his bath. At almost 60, Fonda was one of the better preserved leading men of his generation, fit and distinguished, with those piercing blue eyes.

In Advise and Consent, Fonda’s adversary is Brigham Anderson, played by Don Murray. “Brig” wants to get to the bottom of Fonda’s liberal politician past. Henry’s opponent in The Best Man is Cliff Robertson, as Joe Cantwell. An eagle to Fonda’s dove, Cliff’s Cantwell’s really a vulture. He’ll stop at nothing to win, including revealing that Fonda’s character once suffered a nervous breakdown.

Advise and Consent was based on Allen Drury’s Pulitizer Prize winne/ best seller. The Best Man was adapted from Gore Vidal’s 1960 Broadway play, which was nominated for six Tony Awards, with over 500 performances given in its original run. Both writers’ work often covered the political scene, and these works are two of their best.

Otto Preminger was a controversial director by his own design, but I liked his dramas that were based on strong stories and characters like Anatomy of a Murder and Advise and Consent. They still feel adult, realistic, and unsentimental. Preminger loved location shooting and you get to see a lot Washington, D.C. in Advise. Otto also liked to cast real people of the milieu, which again, added to the authenticity. While a bit long, I found Advise most engrossing and stylish. As for Franklin J. Schaffner, he was an intelligent director who came up through live TV, won a slew of Emmy Awards, capped by directing the famed TV tour that Jackie Kennedy gave of the White House. His film of Gore Vidal’s The Best Man is also adult and concisely told. And yet another twist that makes these two movies a mind meld: Prior, Schaffner directed a Broadway version of Advise and Consent. While it wasn’t the smash of The Best Man, it was a modest success.

Another reason for my brain blur with these films is that both have presidents who are gravely ill as pivotal characters. In Advise and Consent, at 57, Franchot Tone was the same age as Henry Fonda, but is a ghost of his former self. The fine-featured actor with a twinkle in his eye was a heavy drinker and smoker, which took its toll. Note that Tone has a cigarette going in nearly every scene.  In The Best Man, Lee Tracy is wonderfully irascible as an old-school Truman type, former President Art Hockstader. Tracy, who got the film’s sole Oscar nod, was a mere seven years older than Fonda. He’s quite believable as someone at death's door, since Tracy had a drinking problem, which had hurt his screen career. Ironically, the actors died exactly a month apart, in the fall of '68. Speaking of badly aging actors, Charles Laughton died at age 63, shortly after Advise and Consent completed filming.

Political Hotshots with a Homo Past

Another reason I can’t keep these films straight (pun intended) is because I always get genial Don Murray and Cliff Robertson mixed up. Here, they are both self-righteous young politicians whose pasts hide a wartime romance with fellow soldiers. Both get phone calls threatening to reveal their past. Murray’s senator in Advise and Consent commits suicide; in The Best Man, Robertson is unnerved but goes on the offensive. Preminger, who loved to push the prurient envelope, presents Murray's secret more explicitly, but sympathetically. In Advise and Consent, Robertson’s Cantwell browbeats ninny Shelley Berman into the ground.

Hostess with the Mostest?

In Advise and Consent, Gene Tierney plays a classy Washington hostess who knows her stuff. This was Tierney’s fourth film with Otto Preminger. In The Best Man, Ann Sothern plays a political gadfly like a Washington D.C. version of Virginia Graham. Totally apples and oranges, Gene and Ann are both fun to watch.

The Best Man has Gore Vidal's acidic wit, with many lines that are still painfully apt. The Best Man is also a half hour shorter than Preminger's more leisurely Advise and Consent. But both are great fun if you like political intrigue and good dialogue.

Both films boast an all-star cast of mostly veteran actors. Advise and Consent has the bigger cast, perhaps because it’s 2 hours and 18 minute running time allows for more characters. While Margaret Leighton’s performance is good in The Best Man, I found it odd that they didn’t cast an American star opposite Fonda. Either Lauren Bacall or Maureen O’ Hara would have made a great brittle, estranged political wife, or Dorothy McGuire, for her class and intelligence. In Advise, Charles Laughton gets to run the gamut without running amok as wily, but ultimately fair ‘Seab’ Cooley. Walter Pigeon, so often cast as noble, gets to show a more sophisticated side as Senate Majority Leader Bob Munson from Michigan. Burgess Meredith and Shelley Burman get to be annoying as the quirky squealers in Advise and The Best Man, respectively. The acting in both films is top notch.

In Advise and Consent, Betty White is a brunette and a senator! In The Best Man, Mahalia Jackson appears as herself, singing gospel at a political dinner. If this seems incongruous, remember this is the same film that gives “the voice of Frank Sinatra” a cast credit!

While The Best Man opens with a series of classic presidential photographs, Preminger calls upon his favorite titles artist, Saul Bass, to create another eye catching opening titles sequence.

The bottom line: The Best Man has a zingier script and a shorter running time, but Advise and Consent has the bigger story and cast. Both get my vote!

FYI: I put all the movie overflow on my public FB  movie page. 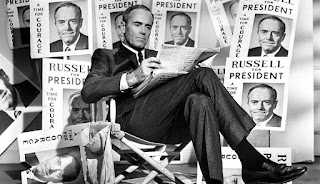 Posted by http://ricksrealreel.blogspot.com/ at 5:37 PM

http://ricksrealreel.blogspot.com/
I write this blog to keep me right!

“ONLY ‘the face in the crowd’ changes, but the song remains the same. It is us who have changed. Too many people are willing to overlook the deep flaws of their idols, as long as they can continue to believe the false message.” That’s Rick Gould, author of a terrific blog site about movies, “Rick’s Real/Reel Life.” The above quote comes at the conclusion of Rick’s fine examination of “A Face in the Crowd,” Elia Kazan’s 1957 classic about political ambition run amuck. Now wouldn’t be a bad time to revisit “A Face in the Crowd.” If you want to have a little déjà vu/possible future projection experience. Certainly visit Mr. Gould’s site, beautifully put together, where one can find intelligent and amusing analysis of films as varied as “Giant,” “Dog Day Afternoon” and “Auntie Mame.”

Rick Gould, a writer living in the MI U.P.

http://ricksrealreel.blogspot.com/
Marquette, MI, United States
I write this blog to keep me right!